Dispirited? Moi? Well yes, a little. It seems that women’s works will always, always be neglected in favour of men’s. Despite excellent fiction written by women, despite the situation being exposed again and again and despite our best efforts. I am dispirited. 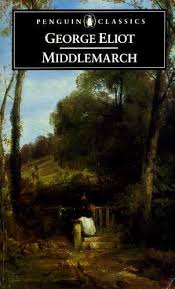 Take the Telegraph’s list of 100 novels everyone should read, for example. Good start – first on the list is Middlemarch by George Eliot. There are, count them, another 18 novels written by women in the list. There is, of course, Charlotte and Emily Bronte. Virginia Woolf, Jane Austen and on through Elizabeth Gaskell, Mary Shelley to Harper Lee. I wouldn’t actually disagree with any of the 100 novels, they should all be read. And more too. People should read. But 19% is not a good representation of women’s writing in a list with that title. 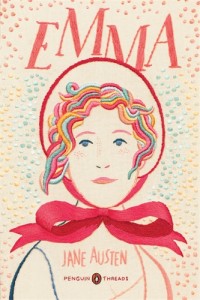 Bit of a girly cover?

Same again in the list of 100 best novels written in English from Robert McCrum, published in the Guardian in August 2015. 22% books were by women. Emma by Jane Austen was #7 on the list and the first by a woman. The list was criticised for its lack of diversity (including women, people of colour, the Irish). Readers added another 15, of which 6 were by women.

If the proportion of women rises above 17% in Hollywood crowds people believe that women are in the majority, according to Caroline Criados-Perez author of Do it like a Woman. In lists of fiction the threshold appears to be about about 20-25%.

Perhaps the problem is the lists. The idea of the 100 best in fiction is subjective, and reflects the compilers’ tastes, prejudices, knowledge, experiences. Guess who compiles the lists!

Research is undertaken annually by VIDA Women in Literary Arts and can now show the picture of women writers in a number of categories in leading literary journals over 5 years.

The 2014 VIDA count tells a vital story about the lack of parity in the literary arts. In addition to surfacing the barriers women face in the literary space, the research shows that the obstacles are compounded for women of color. Women Authors and the Media.

VIDA looks at the journals and counts, by gender, its reviewers, the authors reviewed and the bylines of its journalists. Here are the charts for two UK based journals: Granta, which does comparatively well and the TLS, which does not. The men are in red, the women in blue. 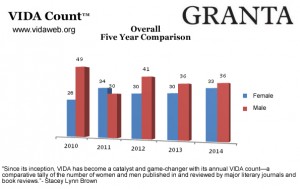 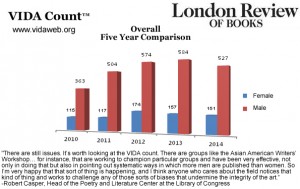 And here is a particularly depressing chart if you are a woman author trying to get attention for your books from New York Review of Books. At least it improved at the last count. 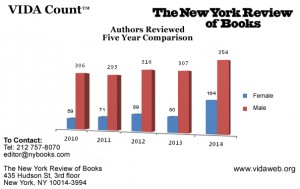 And it’s more than numbers. Meg Wolitzer wrote about the women’s fiction question in the New York Times in an article called The Second Shelf: on rules of literary fiction for men and women.

She uses the term ‘women’s fiction’ to refer to literature written by women, but acknowledges that it is used to describe

a certain type of fast-reading novel, which sets its sights almost exclusively on women readers and might well find a big, ready-made audience.

All fiction by women gets lumped into this category, especially by some men, as ‘one soft, undifferentiated mass that has little to do with them,’ she argues. She looks at reviewing, Amazon categories, book jackets, book length, the gender of the main characters which all indicate to readers what one might call the gender of the book. And that there are exceptions (prize winning books by women for example) does not indicate an approaching literary idyll. As poet and literary critic Katha Pollitt says

For every one woman, there’s room for three men.

The eminent historian Mary Beard has shown how women in public spaces have always been silenced by men, from Penelope in Homer’s Odyssey onwards. Her LRB lecture was called The Public Voice of Women.

Here are more exposes of how women writers are treated.

Gendered travel writing How not to be Elizabeth Gilbert by Jessa Crispin in Boston Review 20.7.15 ‘Men go on adventures, women on journeys of self-discovery’

Women in Translation Month Biblibio 21.5.15 who followed up the introductory post with 31 daily posts in August. 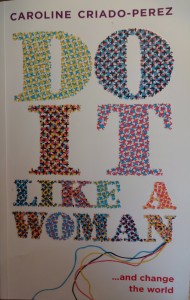 Caroline Criados-Perez (Do it like a Woman) ascribes male domination to the male default. This is the attitude that women are the exceptions, men the norm. Only exceptional novels make the lists, are reviewed, are published. We must expose it, show it up for what it is and for how it deprives everyone.

Go on counting, and go on publishing the figures. Go VIDA!

Follow the example of #Readwomen, not necessarily to read women only but to be conscious of the proportion of women writers and take some corrective action if necessary. I posted about #Readwomen in June 2014. It was my 100th post on Bookword.

Take account of the long and short lists from the Bailey’s Prize for Women’s Fiction. It is likely that we will need a women’s prize for the foreseeable future. I wrote a post about the need for such a prize in 2013 called Who or what are literary prizes for?

Promote specific initiatives, such as Women in Translation Month. This twitter focus -#WITmonth – brought many great translated works of fiction to readers’ attention. My contribution was The Mussel Feast by Birgit Vanderbeke

Bookword includes a series that highlights older women in fiction, nearly all written by women. I believe that we need to see images, read books, watch plays and films about those who are less visible in our world than white, middle-aged, males or beautiful young people.

Talk about the obstacles, and praise the breakthroughs and advances. Publishers, editors, list compilers, bookstore buyers, judges panels – they all need to be aware of the bias towards male writers, and be prepared to justify it when they continue it. And they need to know about all the great novels by women and how we want to read them.

And it matters because …?

Because the job of fiction is to take people to worlds that are other than their own, worlds elsewhere, show different perspectives, understandings, experiences. Reducing access to the 51%’s other worlds makes no sense. 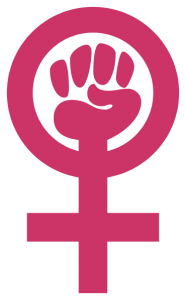 This is my 200th blog post. It matters to me and it should matter to everyone who enjoys great fiction (which should be everyone, but that’s for another post!). So I shall stop focusing on the dispiritedness and go forth again, into the struggle.

Is there some action you can propose to promote women’s fiction?