The United States joined the war effort in Europe, sending troops to Britain in 1942. Britain had been at war since September 1939 and taken a pounding in the Blitz in 1940-41. The blackout was in force and rationing was strict. The Allies’ experiences of the war were different, and both sides were keen to avoid exploitation of differences.

More than the difference experiences of war, most US servicemen had not been to Britain, and US war department issued seven pages of guidance to the men making the Atlantic crossing called Instructions for American Servicemen in Britain 1942. Differences between the countries were acknowledged, but the claim was made that values and principles were the same, the differences lay in some daily aspects of life.

The most evident truth of all is that in their major ways of life the British and American people are much alike. They speak the same language. They both believe in representative government, in freedom of worship, in freedom of speech. But each country has minor national characteristics which differ. It is by causing misunderstanding over these minor differences that Hitler hopes to make his propaganda effective. (4) 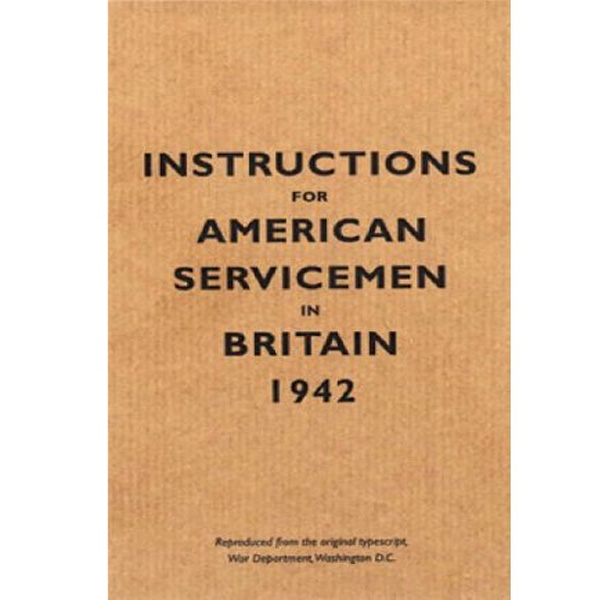 The Instructions is an interesting historical document. It tells us a great deal about Britain and its peoples by presenting them to Americans with little knowledge or experience of Britain. It also tells us some things about how Britain has changed since 1942.

It was written to provide guidance on unfamiliar aspects of British life. Some of these were longstanding, like the coinage (pounds shillings and pence in those days) and use of certain words. But US servicemen were also warned about changes brought about by the war, such as rationing and the blackout.

And as a historical document to study today, we can see how much change has occurred in the 75 years since it was issued. Perhaps the most significant difference is that it is not necessary for US citizens to be informed about Britain these days. American dominates our popular culture (film, social media, music, coffee shops etc). And a curious visitor can find out much through the internet.

I obtained my copy of Instructions as background reading for a short story I am writing, but also as part of my interest in the history of the 1940s and 1950s.

Warnings to US servicemen

As well as underlining the similarities and common purpose of the two countries the booklet warns the reader how not to offend the British, or how to understand them. Chief among these was the description of the British character as reserved.

So if Britons sit on trains or buses without striking up a conversation with you, it doesn’t mean they are being haughty or unfriendly. Probably they are paying more attention to you than you think. But they don’t speak to you because they don’t want to appear intrusive or rude. (5)

Foreigners on London’s tube today might perceive the same behaviour. Country buses, by the way, are a different matter.

More importantly Britain was a country involved in total war and may look ‘a little shop worn and grimy to you’.

The houses haven’t been painted because factories are not making paint – they’re making planes. The famous English parks and gardens are either unkempt because there are no men to take care of them, or they are being used to grow needed vegetables. British taxi cabs look antique because Britain makes tanks for herself and Russia and hasn’t time to make new cars. British trains are cold because power is needed for industry, not for heating. There are no luxury dining cars on trains because total war effort has no place for such frills. The trains are unwashed and grimy because men and women are needed for more important tasks than car-washing. The British people are anxious for you to know that in normal times Britain looks much prettier, cleaner, neater. (11) 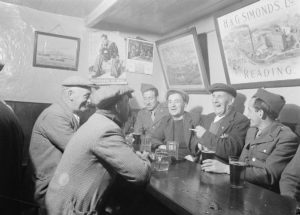 And they are reminded that Britain is a small country, ‘hardly bigger than Minnesota’, and has weather that is almost continuously damp. They are warned of different refreshments: warm beer and ubiquitous tea rather than coffee. Pubs will welcome you so long as you remember that the pub ‘is “the poor man’s club,” the neighbourhood or village gathering place’.

As a historical source revealing attitudes of the time, the Instructions are mostly about the behaviour and customs of the men of Britain. You might have noticed that there were ‘no men’ to take care of the parks and gardens. Actually there was a huge land army of women working on the farms. 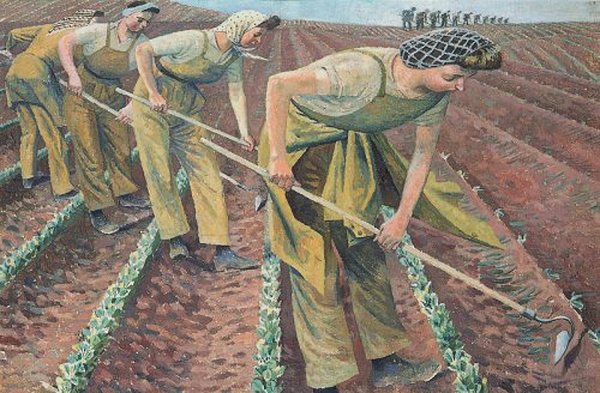 Turnip Singling in 1943 by Evelyn Dunbar

On gender issues there is a section that reveals more about American attitudes than about Britain’s women. I cringe when I read the warning to the Americans

A British woman officer or non-commissioned officer can – and often does – give orders to a man private. The men obey smartly and know it is no shame. (25)

And to reinforce the respect of British servicemen for their female counterparts the leaflet explains:

For British women have proven themselves in this way. They have stuck to their posts near burning ammunition dumps, delivered messages afoot after their motorcycles have been blasted from under them. They have pulled aviators from burning planes. They have died at the gun posts and as they fell another girl has stepped directly into the position and “carried on.”

And as if this information about the ‘girls’ is not enough the writer reassures the Americans,

There is not a single record in this war of any British women in uniformed service quitting her post or failing her duty under fire.

Not quite finished with this subject, the writer cannot pass up an opportunity for this comment:

… and if she has a bit of ribbon on her tunic – remember she didn’t get it for knitting more socks than anyone else in Ipswich.

Another difference that the Americans were advised to keep quiet about was the differentials in pay between a US private soldier and the British Tommy.

The D-Day Landings were more than two years ahead and there were still three more years of the European War and four of the war in the Far East. The arrival of the US forces added more changes to those that the bleak first years of the war had brought to British society.

The booklet says nothing about attitudes in Britain to ‘coloured’ people. The segregationist activities of some US servicemen, especially from the South, were very alien to the British and offended them greatly. (See the film Welcome to Britain where it was dealt with).

No doubt from time to time Americans forgot to drive on the left, broke the rules on the blackout, complained about warm beer and lack of decent coffee, and their hosts’ lack of soap, and were confused about British coins. From this point, however, the course of the war began to change.

Welcome to Britain was a film for newly arrived US servicemen made by the Strand Film Company for the Ministry of Information. You can find it on You Tube.

In April 1944 a rehearsal for D-Day went badly wrong and 946 US servicemen were killed by ‘friendly fire’ on Slapton Sands in Devon. I wrote about it as part of a walk I did last year: 26 Steps: Walking and Writing