OMG the assumptions we make! I thought that this was a translated novel. Silly me, silly assumption. Rabih Alameddine may be of Lebanese origin, but he writes in English. Towards the end of the novel I even began to question my assumption about the gender of the author. But Rabih Alameddine is a man.

This is the 20th in the series of older women in fiction. 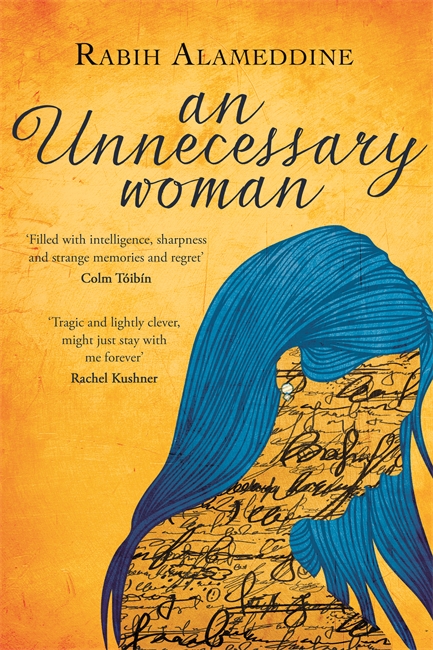 The events that frame this novel take place over about 24 hours, but we also learn about the narrator’s life through her extended flashbacks. It is set in Beirut, and for the most part in an apartment in the city. Aaliya is the unnecessary woman of the title. She is 72, and she has lived in her flat since she was married, despite being quickly divorced. The apartment itself is subject to dispute as accommodation is short in Beirut, and Aaliya has family who would traditionally expect to take the flat in her place. But she has a champion in the woman upstairs, Fadia, who owns the block.

Aaliya’s half-brother tries to make her take responsibility for their mother. He has brought her to the apartment. The mother simply screams, and screams, and it is only when Fadia instructs them to leave that her brother takes the elderly mother away again. During the night there is a plumbing disaster in the flat above, which first brings chaos and then reassessment to Aaliya’s controlled and isolated life.

My mother raises her wraithlike head and looks at me. Her furrowed face contorts, shrinking the wrinkles and multiplying them tenfold. Her mouth draws open in toothless horror. Her gnarled hands rise, her palms face me, warding off evil. My mother tries to draw back from her daughter-in-law’s arms. The black shawl falls from her bony left shoulder, but doesn’t fall off completely. Her eyes display strident, unspeakable dread. She screams, a surprisingly loud and shrill shriek. For such a frail body, a defiant skirl of terror that does not slow or tire. (72)

During the narrative we also learn about Aaliya’s childhood, failed marriage, friendship with Hannah, and how she survived the Civil Wars in Beirut. It has not been an easy life.

The novel begins when Aaliya accidentally dyes her hair blue.

You could say I was thinking of other things when I shampooed my hair blue, and two glasses of red wine didn’t help my concentration (1)

She has been thinking about which book to translate next. It is a day near the end of the year and Aaliya is looking forward to beginning the translation of another book. For about 50 years, Aaliya has been translating books (often themselves translations eg Sebald) into Arabic, for her own pleasure. She has acquired a library, thanks to her job in a bookstore. She is well versed in the Western and largely male literature of the 20th Century. Her favourites are Sebald and Yourcenar’s autobiography of Hadrian.

Aaliya is a loner, her friend Hannah (also a single woman who made herself useful to her ex-fiance’s family) died years before. Since she retired from the bookstore where she worked Aaliya has seen almost no-one. While Beirutis ignore her, she gets on with her chosen occupations, reading and translating.

In many ways for most of the 72 years of Aaliya’s life she has been in conflict with the normal rules of Lebanese society. Her family found her difficult, and married her off while she was still at school. The marriage was a failure, and she was divorced soon after. She has held onto her independence and the apartment, even through the dark days of the Civil War.

Some aspects of her life were a little shocking and unlikely: that she would acquire an AK-47 and sleep with it, and the manner in which she acquired it was also a stretch to the imagination. But desperate times call for desperate measures, and Beirut was an anarchic place at that time, so …?

Aaliya maintains her independence, but at the cost of mattering to no-one, being unnecessary. Yet in the end it is the response of the other women in her apartment block who help when the water overflows from the flat above, and she is forced to reassess her life and friendships.

It was this scene that made me wonder if Aaliya’s author was a woman. The three ‘witches’ and our protagonist getting together to solve the problem seemed a supremely female approach.

Really this is a book about Twentieth Century novels, European and American novels.

I enjoyed it a lot, especially for the thoughts about literature. And for giving strong agency to an older single woman. I have read reviews that were less fulsome, saying that Aaliya was simply mouthing Alameddine’s words. And that may be true, but I found the idea of this old woman very compelling. 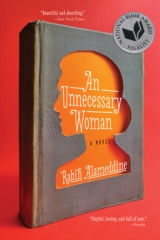 An Unnecessary Woman by Rabih Alameddine published in the UK by Corsair in 2013. 291pp

An Unnecessary Woman was a finalist for National Book Award for Fiction 2014 (USA).

A critical review from the Irish Times by Ellen Battersby in February 2015.

A more favourable review from the Guardian by Siri Srinivas in January 2015.