My Shitty Twenties by Emily Morris

In my case it was my shitty thirties. To be honest only certain aspects of my thirties were shitty. I became a single mother and tried to continue to make a life for myself. It was hard, very hard, and it came back to me when I read Emily Morris’s memoir about becoming a single mother in her twenties. It’s a memoir of a much more recent past than my struggles as a single mother. 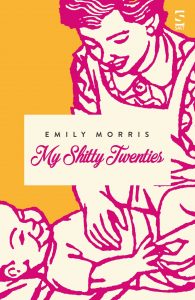 Emily was enjoying the life of a student in Manchester at the turn of the century. She had a job she loved, was just begun to find the focus for her studies as well as appreciating the contrast between her social life in the city and her hometown of Southport.

Then she discovered she was pregnant. And there she is: 22 years old, pregnant, studying, working, and in Manchester. She decided to keep the baby.

It has to be said that the father of her child comes out of this memoir very badly indeed. In the first place he lied to her suggesting he was not able to make her pregnant. In the second place, his response to her decision to continue the pregnancy was

In the third place, he offers no support and no interest once the baby was born. In the fourth place … you get the picture. I suppose he did give her a great title, and contributed a tiny something towards her son.

The heroine, not including Emily herself, is Emily’s mother who supports her as a model mother would. She backs her decision, is interested in how Emily will manage, offers her a home, provides her with a home, goes with her to hospital, including on the night Tom is born and then continues to support her for another 18 months or so. Every single mother should have a mother like her.

Emily herself shows considerable perseverance and determination. Just having a baby is physically hard work. It’s true what people say. They don’t call it labour for nothing. And then, this small dependant being takes over everything, and if you are the sole parent you have to make all the decisions, shoulder all the worry, make all the arrangements, and try to remember your own life in the midst of the focus on the shitty, snotty, vomitty baby.

I found My Shitty Twenties surprisingly readable. There is no self-pity, no mawkishness, no self-indulgence, no lingering over how hard it all is. And it all is. Rather, Emily’s courage and determination to bring up the child, to continue her studies and to earn her living are reported in a straightforward tone and with a combination of good humour and insight. 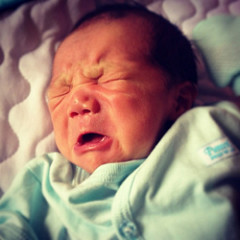 I was not surprised to read that this memoir began as a blog. The chapters are short, and often end with the reversal of some belief, or a person being proved wrong, or a new insight into life. She presents her struggles with breastfeeding, the mothers’ web site, the consoling parrot, and we understand them all. She writes with the immediacy of the best bloggers, and doesn’t go on too long.

It’s hard and unrelenting work being a single mother. The rewards are huge. Managing work, the expectation and assumptions of strangers and friends and family is tiring, although often amusing afterwards. There are bad days, abuse by strangers, misrepresentations. There is also unexpected kindness and luck. And in writing My Shitty Twenties she has built a history to share with her son. 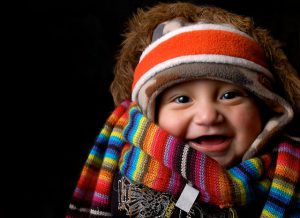 I hope that we can expect more from Emily Morris now she has reached her ******y thirties.

Filed under Books, Reading, Reviews, The Craft of Blogging