There have been ten novels in the Decades Project so far. We have reached the 1990s and my choice is The Shipping News by E Annie Proulx. I was so pleased to reread it. It’s an excellent novel that celebrates the power of stories to build communities. 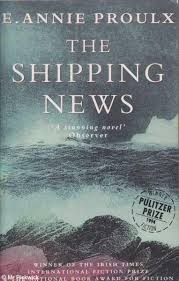 Here is an account of a few years in the life of Quoyle, born in Brooklyn and raised in a shuffle of dreary upstate towns. (1)

Quoyle is hapless. A good word that, which in its original meaning speaks of the lack of hap, ie luck. Today it also implies incompetence. This novel is about how Quoyle found his hap.

Hive-spangled, gut roaring with gas and cramp, he survived childhood; at the state university, hand clasped over his chin, he camouflaged torment with smiles and silence. Stumbled through his twenties and into his thirties learning to separate his feelings from his life, counting on nothing. He ate prodigiously, liked a ham knuckle, buttered spuds. (1)

At the start of The Shipping News Quoyle is a journalist in New York, but not competent enough to stay in employment. He is married to Petal, but she prefers to sleep with anyone else. She runs off with one of her lovers taking their two children. In one terrible week Quoyle’s parents commit suicide together, Petal is killed in a car crash having sold their children. The children are rescued and Quoyle’s aunt agrees to help him, suggesting that they move back to her childhood home in Newfoundland.

Her house there turns out to be isolated, very old, and held down by ties into the rocks. It needs a great deal of work to make it habitable. Aunt sets about getting things organised and Quoyle takes up his job with the local newspaper, the Gammy Bird. He starts out with responsibility for the shipping news, a record of which ships enter and leave the port of Killick-Claw.

He turns out to be rather good at telling stories about the boats, and just about everyone they meet has a story to tell, often connected to boats, fishing and the sea. Quoyle, Aunt and the two girls gradually connect to their new community, through work, supporting each other, making friendships and love affairs, and telling their own stories.

By the last page Quoyle has learned a good lesson.

And it may be that love sometimes occurs without pain or misery. (337) 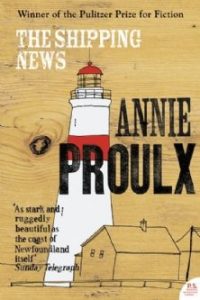 The theme of knots and knitting runs through this novel. (I could have said threads). Quoyle’s name is a variant of coil. We are told that ‘it may be walked on if necessary’ (1). He needs straightening out. The woman who will do it is called Wavey. Many of the characters knit. Knots appear in the headings of the chapters, often with line drawings taken from The Ashley Book of Knots. One character uses knots to conjure magic spells. Knots, of course bind, and are essential to those who live with boats.

Another theme is of sexual abuse, especially within families. The Gammy Bird runs a column on SA stories in every edition. For one character, only when her story of abuse is revealed can she live in peace in Killick-Claw.

I love the writing of this novel. Frequently sentences appear abrupt, often because pronouns have been omitted, or phrases such as ‘there were’, or verbs. It has the effect of putting the reader alongside a character.

We have weather, the changing seas, the mysteries of the local small islands, the seafood diets, creative and handy people, and above all the stories. By the final page Quoyle has found his hap for he is now the editor of the Gammy Bird and takes part in telling the story of his community. 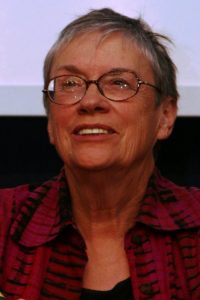 This year Annie Proulx won the Medal for Distinguished Contribution to American Letters, noting especially her ‘deep reverence for the beauty and complexities of rural America’. Now known simply as Annie Proulx, she has written other novels, short stories and memoirs. The Shipping News won the National Book Award and the Pulitzer Prize in 1994. Kevin Spacey and Judi Dench starred in the 2001 film adaptation of the novel. While it does not capture the full subtlety of the novel – how could it? – it was good, not least for the grainy appearance of the Newfoundland setting. Brokeback Mountain in the collection called Close Range was also made into a film. I enjoyed Postcards (1992), but have to admit that I didn’t get far with Barkskins (2016).

(Photo Annie Proulx in 2009 US Embassy in Argentina, via wikicommons)

For the Decades Project I have selected a book from each decade from 1900 onwards, reading one a month, and reviewing it here. The idea is from my library’s Reading Passport scheme.

I have not yet decided what to read for the final two decades – 2000s and 2010s. Suggestions are always welcome.