Stone in a Landslide by Maria Barbal

Readers need something different from time to time. It’s the equivalent of a palate cleanser; or a short sleep in the afternoon when you had a really bad night; or a ballad when you have bombarded yourself with 19th century Austro-Germanic music. Sometimes poetry will do, or a short story. And here’s a perfect way to refresh the reading mind: a translated novella. But be warned, this is not fiction lite.

Written originally in Catalan in 1985, Stone in a Landslide was translated by Laura McGoughlin and Paul Mitchell and published by Peirene Press in 2010. It’s a gem. 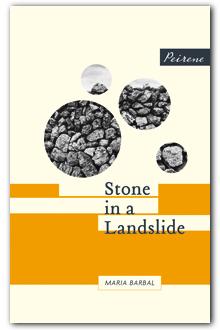 The story is told in 126 pages by Conxa, looking back in her old age. At the age of 13 she leaves her too-big family to live with her childless aunt and uncle in a nearby village on the hillside. It is the 1920s. Conxa lives a patient and level headed life, supported by Tia and Oncle, and later married to Jaume with whom she has three children. The village community is everything, with its customs, rituals, tolerances and slow change. Even Barcelona is a distant place, from where cousins visit every summer. In the 1930s the Spanish Civil War intervenes and her husband is taken away.

This is the quiet story of a woman living on the land, valuing family connections, friends, differences and respect built up by years of honouring and community interdependence. Large events shape life, as do poverty, the seasons, the demands of land and animals. And inevitably the modern world forces its changes and the family can no longer subsist in the village and by the conclusion of the novella Conxa has gone to live in her old age with her son in Barcelona.

The title’s significance becomes apparent in the third section as external events intrude increasingly upon her life. Taken to a prison with her children because of Jaume’s Republican connection, she likens herself to a stone.

They take us to Montsent prison. I didn’t even know where it was. The worst is not knowing anything. Elvira [her daughter] moves around and talks to everyone, even the jailers. She does what I am not capable of doing. I feel like a stone after a landslide. If someone or something stirs it, I’ll come tumbling down with the others. If nothing comes near, I’ll be here, still, for days and days … (p89)

A stone is lost among others in a landslide, but the landslide depends on the individual stones. Each stone is affected by those around it; a landslide is dangerous and changes the landscape. The stone is an image that reappears in later pages. For example: moved to a camp the family endure a long period of waiting. She says, ‘The days weighed on my heart like flagstones.’ (p99)

Reflecting on the disappearance of Jaume, she employs another image that stings when you read, and lingers in the memory:

I knew he was dead and I would never again have him at my side because war is an evil that drags itself over the earth and leaves it sown with vipers and fire and knives with points upright.’ (p95-6)

The imagery arises from the harsh rural landscape into which she was born, and where she worked and raised her family. You can see from these short extracts that Stone in a Landslide is written in simple, short sentences and in language relevant to the rural community.

There are moments of exquisite pleasure, as when Conxa and her friend Delina go picking mushrooms.

We left at daybreak and at the beginning we were as excited as little girls because finally we had enough time to talk to each other properly. When the going got steep, though, we held our tongues to save our breath.

I liked this outing. I was in the meadows, following the darker grass of the tracks thinking about nothing except finding a big patch of mushrooms and filling my basket. The walk was hard but, after going up so far, it was easy enough to walk down again. From where we were we could see all the villages as if they were close by, with the black slates of the roofs and the occasional plume of smoke revealing signs of life. We stopped at the top to eat, red-faced and with a light wind on our necks, before we started the painstaking search for mushrooms. (p66-7)

But you do not get the feeling that her life has ended as she wanted. The landslide has brought her, as so many others, to the city. In this case to Barcelona. Conxa is estranged from the urban life, emphasised by paragraphs that begin ‘Barcelona is … ‘

Barcelona is having the sky far away and the stars trembling. It is a damp sky and very grey rain.

Barcelona is not knowing anyone. Only the family. And sometimes, hearing foreign words spoken. It is losing the memory of the sounds of the animals at home as you look at dogs chained at dusk.

Barcelona is a small loaf of bread which is finished every day and milk from a bottle, very white, with no cream and a thin taste.

Barcelona is wordless noise and a thick silence full of memories. (p124-5) 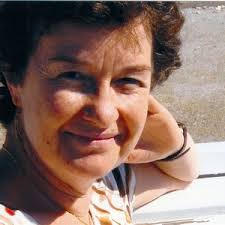 Once again, congratulations to Peirene Press for the innovative approach to publishing and bringing to English readers such a wealth of translated novellas. You will find reviews of The Mussel Feast by Birgit Venderbeke, and Mr Darwin’s Gardener by Kristina Carlson, both published by Peirene Press, on this blog.

Another blog review of Stone in a Landslide, in the context of translations, can be found on Book Snob.

One Response to Stone in a Landslide by Maria Barbal