Retiring with Attitude in Leatherhead

My father only had two jokes. One was about a golden screw that replaced a tummy button (much loved by small children) and the other referred to Leatherhead. Neither is very funny. So Leatherhead has childhood resonances for me and until last week I had never been there. On Wednesday evening, Eileen and I were at a library event to promote our recently published book: Retiring with Attitude.

Yes Eileen, why do we do it? I had to come up from Devon. Our journey from Eileen’s house took place in the rush hour (which had a special flavour as Eileen was deliberately pushed from behind because she ‘slowed down at the ticket barrier’). Why do we wrap our selves up and go out on a wet and windy night to address complete strangers? This is how we answered our own question: 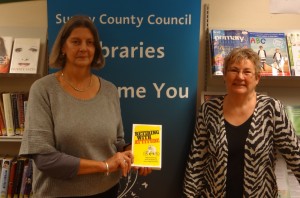 We have something to say to people about retiring

We want to extend our ideas about retiring, to be stimulated

We enjoy doing things together

It’s more exciting than knitting in front of the telly

It’s part of publishing a book

The money wasn’t the thing, by the way. But we do believe that writers should be paid for their work, which includes events to promote their books.

We always approach these events with a learning model in mind – in this case reviewing what we have done previously, reflecting on how well it went and then planning with these points in mind.

So on this occasion we decided to read from the book – seems obvious really, but we hadn’t done it at the Ways with Words Festival; to be more explicit about our reasons for writing the book; and to be ready with nuanced, flexible and analytic responses to points raised.

We wrote our scripts and practised on each other in the morning, bolstered by the publicity on the web that said …

they will be presenting their take on retirement warmth and humour.

The library in Leatherhead is in an old manor house and the library staff were rightly proud of the premises. It was like visiting a second hand bookshop which houses its enticing collection in different rooms and you can wander through them expecting to make discoveries at every moment.

The library staff were well organised and very supportive to us – such a pleasure to work with such competent and charming people, especially Liam who picked us up at the station and Tom, who took the photos. 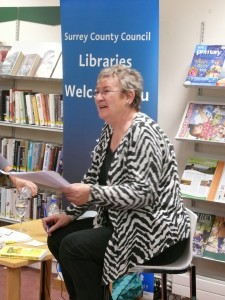 The audience were responsive, especially to the anecdotes in our book, and added their own – who can forget the battle of the fridge? Some of the audience had already read our book and came because of that. Others were being introduced to it.

The session went as we hoped, starting with the general (why we wrote the book, how retirement has changed) and focusing later on a few particulars (need for new connections in retirement, making the transition out of work, the ‘could-you-just syndrome’).

It was fun to sign some of the copies being sold, talking to people about their retirement and their hopes for the future.

A message from the library told us:

The feedback from the audience is overwhelmingly positive. They really enjoyed how you brought their discussions into it – one person said it was ‘refreshingly different’. Another says, ‘it gives us hope!’ and someone else, ‘Good to talk about the ‘problems’ of being retired which don’t usually get discussed …’

Refreshing? We want our book to reach the parts other books don’t reach. So that’s good.

What did we learn?

Preparation is important, especially working together on this and adjusting and monitoring the way we introduce our book.

It’s easy and good to interact with people in a small group (about 30 people on this occasion). 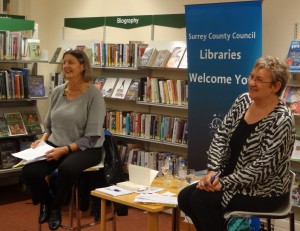 People are enthusiastic about what we have to say. Well several people said they found the session and the book helpful. That’s why we write.

On the train home, we thought we should have finished with another last story from the book: Mavis (you know who you are) and her daily champagne! Next time!

I did warn you.

During the war, in Britain, all road signs were removed to confuse the enemy if they invaded. Of course lots of residents were confused as well. A man in a car was lost, so seeing a local person he rolled down his window and shouted: ‘Leatherhead?’ Back came the reply: ‘Fishface!’

You’ll have to wait for the other joke.

9 Responses to Retiring with Attitude in Leatherhead