This is Elizabeth Taylor’s second novel, published in 1946, and as under-rated as all her novels. In Palladian a young girl enters the adult world. Both her parents have died and needing to support herself Cassandra Dashwood becomes a governess to Sophy, daughter of Marion (a man) owner of Cropthorne Manor. You would be right to pick up that her situation is very like Jane Eyre’s. And Cassandra is quite as ready to fall in love with Marion as Jane was with Mr Rochester. 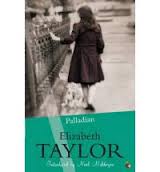 She has the other members of the strange household to cope with. Marion himself seems isolated with frequent neuralgia, and a gloomy disposition. He appears to have not yet overcome the loss of his beautiful wife Violet in childbirth. He pays no attention to the running of the house, and indeed its fabric is chronically neglected.

Marion’s aunt keeps house, and two of her adult children also live in the house – Margaret who announces her pregnancy almost as soon as Cassamdra arrives and whose husband is away at sea; Tom an alcoholic, who, it emerges, had also been in love with Violet.

Daphne du Maurier published Rebecca in 1938, and the story of Palladium has some similarities: the handsome but distracted leading man; a beautiful house, an innocent, naïve girl and an older woman servant who remembers the first wife. Nanny is no Mrs Danvers, however. She is not threatening, merely small-minded and a bully. As readers we know that Nanny is frequently wrong, for example when she accuses Cassandra of pilfering money (it’s Tom) and food (it’s Margaret) and a brooch (it’s a gift from Marion).

Nanny had disapproved of Violet, but she disapproved of Cassandra even more. She had always loved her boys and was not above setting the girls against one another; whether dead or alive. It delighted her to bring Cassandra to the edge of despair about Violet.

From time to time Elizabeth Taylor shifts point of view to tell us directly about a person’s motivation or thoughts. This is considered very risky by tutors on creative writing courses, but Elizabeth Taylor handles it very smoothly.

Cassandra’s arrival changes the dynamic in the house, but not as much as the fatal accident about two thirds through the novel – it’s shocking. unexpected and surprising.

We must assume, I think, that the title refers to the style of architecture, or rather the style of the façade. The house is in fact fatally crumbling. Here is how Elizabeth Taylor describes Cassandra’s first view of it.

The car slowed and turned off the road into a drive between gateposts and broken gryphons, past a mouldering lodge where some bits of washing hung limply in the drizzle. Cassandra somehow – while getting out of the car, managing her belongings, and following Margaret – received an impression of the façade and, as well as the rows of sashed windows and not quite central pediment, smaller details were snatched at and relinquished again by her commenting eye,; pieces of dismembered statuary of dark grey stucco fallen from the walls and a wrought-iron lamp at the head of the steps with its greenish glass cracked.

The house is a burden to its many inhabitants, Marion, who wants no bother, Mrs Vanburgh who is a little out of her depth, Nanny, Margaret who is waiting for the birth of her child, and Sophy and Cassandra seem imprisoned in it.  Another admirer of Elizabeth Taylor is Sarah Waters, author of The Little Stranger, where a similar house seems to be inhabited by spirits.

But the title might also refer to the attributes of those who, like the goddess Pallas Athene, acquire wisdom and knowledge. And it is Cassandra and Marion who gain them.

In the resolution, all comparisons with other novels, Jane Eyre, Rebecca, Northanger Abbey, are irrelevant. Elizabeth Taylor has gone beyond these to explore the anguished response of all the characters with their resolution fitting each one. Tom, the most self-disgusted, a man who thinks and acts dishonourably and honourably by turns, is the least resolved in the end, I feel.

One strange aspect of this novel is that there is no mention of the war, which had just finished in Europe and Far East. No-one refers to their experiences, or the changes brought by the war. Perhaps the closest she veers towards this is the scene where Cassandra is for the last time in her parental home, her father having died two weeks before. A determined local woman pays no attention to the girl in her eagerness to rent the house. The housing shortage was very real. This meeting was also the occasion for a nice detail.

‘What are all these shelves?” The woman stood in the little room and stared.

‘Well, we’d have to pull all that down of course. It needs repapering. They take a good foot off the room all the way round. How many books did he have then?’

‘He had two thousand,’ Cassandra said, suddenly whitening with fatigue and leaning against the door.

Books take a good foot off a room then. I hadn’t thought of books as reducing the circumference of a room. And in that exchange the woman’s crassness is confirmed as is Cassandra’s essential niceness.

If you have enjoyed reading this article and want to be notified of further posts please subscribe to my blog. Just enter your email address in the box on the top of the column on the right. 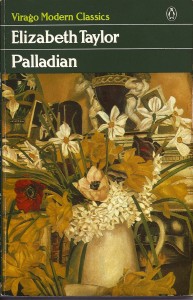 2 Responses to Palladian by Elizabeth Taylor