Inevitably, it’s the word ROMP that comes to mind when reading Orlando. For Virginia Woolf, the word was FUN, as she wrote in her diaries in 1928. She wanted fun, and she described the novel as ‘all a joke’. However, we should not believe everything she said in her diaries for she also said, in the same paragraph, that she thought she would never write another novel. I will admit that Orlando: a biography is not a novel that I especially enjoy, even on second reading. But it has many merits. 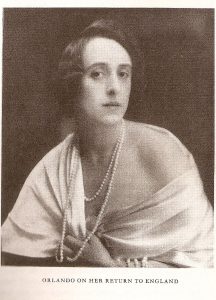 The effect of Vita on Virginia is all contained in Orlando, the longest and most charming love letter in literature, in which she explores Vita, weaves her in and out of the centuries, tosses her from one sex to the other, plays with her, dresses her in furs, lace and emeralds, teases her, flirts with her, drops a veil of mist around her. (From Wikipedia)

The novel is dedicated to Vita. Certainly it reflects the joyousness and exuberance of their relationship. 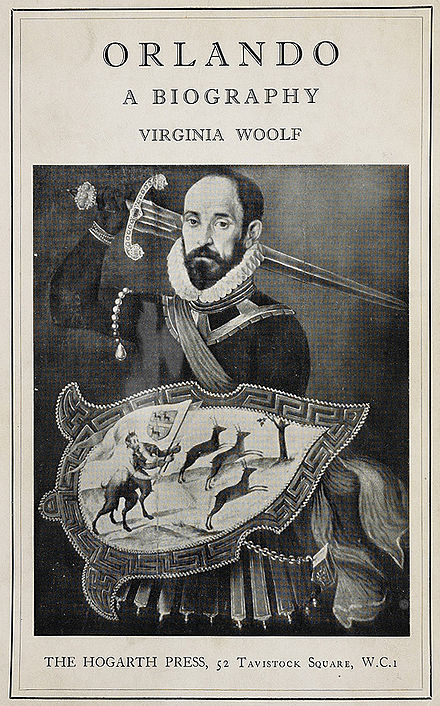 It is a romp through English history from Elizabethan times until the final pages of the book: ‘Thursday, the eleventh of October, Nineteen Hundred and Twenty-eight’. At the start of the novel Orlando is a gentleman in the court of Queen Elizabeth. By the end she is a married mother in comfortable circumstances in the reign of George V.

We follow Orlando through many adventures, of the heart, the pen, as Charles II’s ambassador to Turkey and as a gypsy, in the courts of successive monarchs, in the salons of the fashionable elite and mostly at home in the English countryside. Constant in his/her life is this country home and the oak tree from which can be seen most of England. And also constant is Orlando’s attempt to write a poem called The Old Oak Tree.

Here is a passage from the opening chapter.

So, after a long silence, ‘I am alone,’ he breathed at last, opening his lips for the first time in this record. He had walked very quickly uphill through ferns and hawthorn bushes, startling deer and wild birds, to a place crowned by a single oak tree. It was very high, so high indeed that nineteen English counties could be seen beneath; and on clear days perhaps thirty or forty, if the weather was very fine. Sometimes one could see the English Channel, wave reiterating upon wave. Rivers could be seen and pleasure boats gliding on them; and galleons setting out to sea; and armadas with puffs of smoke from which came the dull thud of cannon firing; and forts on the coast; and castles among the meadows; and here a watch tower; and there a fortress; and again some vast mansion like that of Orlando’s father, massed like a town in the valley circled by walls. To the east there were the spires of London and the smoke of the city; and perhaps on the very sky-line, when the wind was in the right quarter, the craggy top and serrated edges of Snowdon herself showed mountaneous among the clouds. (12-3)

The reference to ‘the record’ is an example of how Virginia Woolf draws attention to the act of writing. She refers to this, sometimes tongue in cheek as a historian with few documents, throughout the book.

It is also an example of the use of lists, elaborate, cumulative and increasingly stretching our belief. Orlando can see London, the coast, Snowdon and forty English counties all from his oak tree!

Her love of words is revealed in other lists, especially where they concern fabrics, and Orlando has many gorgeous costumes, both as a man and as a woman. And also in the names of the characters: Marmaduke Bonthrop Shelmerdine is her husband.

Within ten pages of the scene under the oak tree, the great frost descends upon England, and the River Thames is frozen over. The description of the scene on the Thames teems with life and people and reflects Virginia Woolf’s skills in observation. Her fondness for walking through the streets of London is well known.

You might also have noted the reference to waves, which often featured in her writing.

You could hardly have your hero turn into a woman without some animadversions upon the differences in the experiences of men and women. Some of this was being worked on in Virginia Woolf’s mind as she prepared the lectures that would eventually become A Room of One’s Own which also questions the role of women in fiction, and how women who write fared.

It is necessary to have five hundred a year and a room with a lock on the door if you are to write fiction or poetry. (p103 A Room of One’s Own)

Orlando is independently wealthy and it is somewhat ironic that it was the sales of Orlando that allowed Virginia Woolf to spend money at last. In December 1928 she was reporting in her diary that Orlando was selling well and for the first time since she got married she was spending her own money. ‘My room is secure,’ she reports on 18th December 1928.

Virginia Woolf treats us to her wit and insights as Orlando makes the transition into a woman. She muses on what will be lost to her by becoming a woman. But it seems that neither sex come off well. We must ask with Orlando, why make so much of gender in social relations.

She reflects on these matters as she sails back to England from Turkey, and notices the crew’s response to showing ‘an inch or two of calf’.

‘And that’s the last oath I shall ever be able to swear,’ she thought; ‘once I set foot on English soil. And I shall never be able to crack a man over the head, or tell him he lies in his teeth, or draw my sword and run him through his body, or sit among my peers, or wear a coronet, or walk in procession, or sentence a man to death, or lead an army, or prance down Whitehall on a charger, or wear seventy-two different medals on my breast. All I can do, once I set foot on English soil, is to pour out tea and ask my lords how they like it. D’you take sugar? D’you take cream?’ And mincing out the words, she was horrified to perceive how low an opinion she was forming of the other sex, the manly, to which it had once been her pride to belong. ‘To fall from a masthead,’ she thought, ‘because you see a woman’s ankles; to dress up like a Guy Fawkes and parade the streets, so that women may praise you; to deny a woman teaching lest she may laugh at you; to be the slave of the frailest chit in petticoats, and yet go about as if you were the Lords of creation – Heavens!’ she thought, ‘what fools they make of is – what fools we are!’ And here is would seem that from some ambiguity in her terms that she was censuring both sexes equally as if she belonged to neither … (111-2)

One group of people who come off badly in their meetings with Orlando are the men of letters. With pretensions to authorship the young Orlando invites Nicholas Greene to spend time at his country house. The experience is not a happy one. The poet lampoons his host. Later the 18th Century trio Addison, Pope and Dryden come in for some criticism. It seem that she can love their writing but on meeting them socially it transpires that they are not good company.

And what is one to make of all this. Well, I’m not sure, beyond the pleasure of the imagination at work. The extravagant and outrageous descriptions are a delight. I hope Virginia Woolf had fun writing it. But I prefer her other writings.

Orlando by Virginia Woolf, first published in 1928 by the Hogarth Press. I used the Penguin Classic version (1942, 231pp) in writing this post. 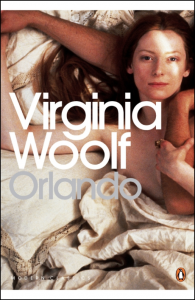 This is my fourth contribution to #Woolfalong hosted by Heavenali on her blog. Previous posts can be found through the links:

To the Lighthouse by Virginia Woolf in January 2016

The Voyage Out by Virginia Woolf in March

Mrs Dalloway in Bond Street by Virginia Woolf in May

3 Responses to Orlando by Virginia Woolf