Books are sometimes objects of beauty in their own right. The novellas published by Peirene are beautifully produced, as well as being well-chosen examples of European literature. Mr Darwin’s Gardener was first published in Finnish in 2009. Kristina Carlson is a noted Finnish writer, winner of the Finlandia Prize and Finland’s State prize for Literature. She also writes children’s literature.

This is not a novel that has a strong narrative, rather it builds through many voices a picture of life in the village of Downe in Kent, where Darwin lived as an old man. He died in 1882, so perhaps it’s a winter in the late 1870s. 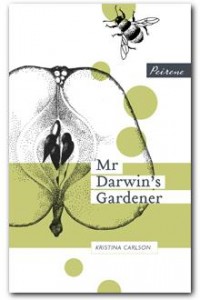 Mr Darwin’s Gardener has been described as postmodern. If this means that it is unconventional I’ll go with that. The author is not an omniscient presence, and the voices and point of view belong to several members of the village, shifting between them as they comment on matters of concern to the villagers. In order to understand how to read this novel I found the reference to Dylan Thomas’s Under Milk Wood very helpful. But in no sense is this similar to Under Milk Wood, mostly because it’s not a play for radio and you don’t hear Richard Burton in your head.

Thomas Davies, the gardener of the title, is present throughout a great deal of the book. His grief at the death of his wife is a challenge to himself and to the village. But in one section he is not even mentioned. This is the curious incident of rough justice meted out to the philandering and light-fingered former verger, Daniel Lewis, who unwisely returns to the village.

Carlson’s novel manages to evoke the communal beliefs about death, misdemeanours, charity, new scientific knowledge, as well as the cycles of nature on which all life is based.

I found it hard to follow the individual villagers, especially as it took a little while to work out what the book required from the reader. I reread it with a notebook and pen to get to grips with the various characters and their relationships. This second reading produced a layer of individual characterisation that was delightful and unexpected. Kristina Calrlson  beautifully evokes a village steeped in its own practices and beliefs, where things change slowly, where the reader had to pay attention to shifts in the text, to references to events beyond the village. Slight tensions were revealed between mother and daughter, as were the weakness of a husband before his wife and the rest of the community, the drunkenness of the doctor and the fearfulness of the schoolmaster.

I also enjoyed the many small details of the animal life in the village:

A brown hare leaps over the stubbly field at the edge of the forest, stops, stands erect. Another brown hare stops, and a third, and a fourth, and a fifth, and a sixth, and a seventh. They stand tall on their hind legs, some twenty yards apart, ears straight, bodies immobile.

The wind blows from the field into the forest. Two crows fly after a goshawk. The crows circle the hawk, and when the hawk breaks its flight to hover, the crows catch up with it. The hawk beats the air with its wings and flies high above the crows.

When the cat jumps over a fallen tree trunk, a rotten branch, sunk into the wet grass, cracks. In the blink of an eye, the brown hares spring into a run: one, two, three, four, five, six, seven. They hop into the forest, and the hawk, gliding high above, sees a field underneath. Green, pointed shoots appear from the soil between pale-brown dry stubble. (p118-9)

And she’s good on smells as well.

The verger opens the church doors. The smell shoots out: bean farts, rotten teeth, skin and hair and wet woollen clothes. Poverty, mingled with the aromas of the swells: talcum, starch and eau de cologne. The smell of the service evaporates in the rain. Innes the vicar draws air into his lungs as he stops at the top of the steps to greet the church folk. God bless you. (p21-22)

This extract is a good example of how Carlson moves within a paragraph to introduce a character and their speech, or thoughts.

And here’s an example of profound observation, in this instance it is the thoughts of old Hannah Hamilton, confined to a wheelchair, who observes the inconsolable Thomas Davies.

Perhaps he plans to take the children with him. Then there would be no one left to grieve.

I know that death is not what a suicide really wants; in fact, he wants his old life back. But you cannot reverse time as if it were a horse. As I grow older and older, I begin to forget things. Evil deeds disappear, and the good ones fade after five minutes. (p12)

And I loved the section which begins ‘We are talking in the saloon bar of the Anchor …’ (p74). What follows is four and a bit pages of the views of the villagers, often as non-sequiturs, or mundane or profane, even profound. The conversation in any pub bar might sound like this today.

I marvel at the job of translation by Fleur Jeremiah and Emily Jeremiah. Here is a link to Emily writing on translation and about the challenges it poses.

The design of the Peirene series by Sacha Davison Lunt is a strong element in their attraction. Mr Darwin’s Gardener has a delightful drawing of an apple in cross-section and a bee by Giulia Morselli. The paper is a pleasure to touch, and the typeface clear, unfussy. I initially subscribed for a year, but after receiving the first two novellas I have signed up for another two years.