Claudia Hampton is 76 years old and approaching the end of her life. In fiction final days are serene, composed, moving calmly towards reconciliation and conclusion. Or it might be a gloomy time, full of regrets for those who will live on as well as for the dying. In Moon Tiger Penelope Lively gives us an alternative to both the serene and the gloomy end of days. Claudia is spending hers as vividly as she lived the rest of her life. 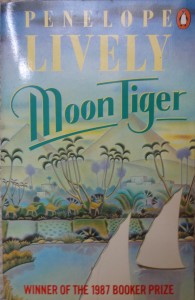 The structure of the novel reflects a view of life not as linear (no journey metaphors here), but as happening all at once. Claudia’s life is an accretion of her experiences, of her achievements and failures, of those she has loved. As she lies in hospital, attended by medical staff, she is visited by people she has known, and by memories of her life. The story is told from multiple and rapidly shifting perspectives. At some points we are with her in her hospital bed, then shift to her visitors, whose different experience of the same events is caught by a slight changes.

She has a project.

‘I’m writing a history of the world,’ she says. And the hands of the nurse are arrested for a moment: she looks down at this old woman, this old ill woman. ‘Well, my goodness,’ the nurse says. ‘That’s quite a thing to be doing, isn’t it?’ And she becomes busy again, she heaves and tucks and smooths – ‘Upsy a bit dear, there’s a good girl – then we’ll get you a cup of tea.’ (p1)

This is the opening paragraph. The history of the world is in immediate contrast with the infantalising language of the nurse (‘Upsy a bit dear, there’s a good girl’). We may be amused by Claudia’s intention, but by the end of the novel we understand that it was a good description of her occupation, even if it was composed in her head

On the next page, ‘the doctor glances at his notes and says that yes, she does seem to have been someone.’ (p2)

As an old person she has been written off, no longer ‘someone’, but the reader soon learns that Claudia has a continuing, rich and fecund inner life. The novel was first published in 1987 (it was the Booker prize winner that year). Can we be confident that medical staff are less patronising today, recognise that a person is still a being, even on their deathbed?

From childhood Claudia’s life has been a challenge to the accepted view of how a woman should live in the twentieth century. In her first years she regarded her brother Gordon as her equal, tied together in argument and competition. In her early adulthood she became a war correspondent in Egypt in the 40s, a career shared by very few women. In the desert she met and fell in love with Tom, but he was killed. Fiction often presents the love of a woman’s life as her main story. With Tom’s death Claudia’s life should, in conventional terms, have been over, or at least ruined, and without further interest to a reader. But her life continued, for forty more eventful years. After the war she had a long affair with Jasper, an exploitative opportunist, and still did not marry, despite having a daughter. Asked why she has attracted so few proposals of marriage her reply suggested a truth – men have had a good sense of self preservation. The daughter, Lisa, was raised by grandmothers. Claudia wrote successful popular history, out of kilter with the grand narratives of post-war academic writing. Old women are usually thought of as moderating their stance towards the world but Claudia does not do this. She lives a life that is too challenging.

The novel then refutes the conventional narrative of what a woman should be and that the endpoint, the purpose of her life is marriage, and motherhood. The ‘happily ever after’ that threads through fairy stories, school stories, romances, and much of ‘women’s’ fiction is not Claudia’s ambition. She has forty more eventful years after Tom’s death.

Neither Claudia nor Penelope Lively accepts the fiction writer’s traditional focus for women. In the conventional version, women’s lives after marriage, when children have been reared and become adults, are of little interest. (There are exceptions: see the growing list of books with strong older women in fiction.) How many years to live after that, in maturity and old age? More than half your life. How to be someone when the world tells you – you should have gone? (A phrase a colleague came across recently is coffin-dodger.)

And the final days and hours? Claudia spends these as she has lived. She examines her life, the final days are another accretion of events, strata laid down as in geology. Addressing her long-dead lover, Tom, in the final chapter, she says,

I am twice your age, You are young; I am old. You are in some ways unreachable, shut away beyond a glass screen of time; you know nothing of the forty years of history and forty years of my life; you seem innocent, like a person in another century. But you are also, now, a part of me, as immediate and as close as my own other selves, all the Claudias of whom I am composed; I talk to you almost as I would talk to myself.

… I need you, Gordon, Jasper, Lisa, all of them. And I can only explain this need by extravagance: my history and the world’s. Because unless I am a part of everything I am nothing. (p206-7)

As in life, so in places, as Claudia describes when she revisited Cairo, the site of her love affair.

The place didn’t look the same but it felt the same, sensations clutched and transformed me. I stood outside some concrete and plate-glass tower-block, picked a handful of eucalyptus leaves from a branch, crushed them in my hand, smelt, and tears came to my eyes, Sixty-seven-year-old Claudia, on a pavement awash with packaged American matrons, crying not in grief but in wonder that nothing is ever lost, that everything can be retrieved, that a lifetime is not linear but instant. That, inside the head, everything happens at once. (p68)

Penelope Lively was interviewed in 2009 (two decades after Moon Tiger was published) by Sarah Crown in the Guardian. ‘The idea that memory is linear is nonsense, What we have in our heads is a collection of frames. As to time itself – can it be linear when all these snatches of other presents exist at once in your mind? A very elusive and tricky concept, time.’

We should not assume too close an identification of Claudia with the author, not least because Penelope Lively was not in her 70s when she created the character and she is still very much with us. She said, ‘while she is not me, I did give her some of my thoughts about the operation of memory and the nature of evidence. I never entirely liked Claudia, but I had great respect for her, and envied her ability to crash through life in a way that I cannot.’

It’s an unsettling book. The comfortable cliché of the journey’s end is rejected. I suspect that some people find Claudia too difficult, an unsympathetic character. She is not prepared to live as other people want or expect. Do we need to like Claudia in order to see that she offers a different approach to being an older woman?

I am indebted to Jeanette King’s book Discourses of Ageing in Fiction and Feminism: the invisible woman, published in 2013 by Palgrave McMillan.

This readalong is the first on this blog exploring older women in fiction. Next, in October, will be Dorothy Whipple’s Greenbanks.

If you have enjoyed reading this and want to be notified of further posts please subscribe to my blog by entering your email address in the box on the top of the column on the right.