Learning to be old

There are three authors of New Age of Ageing. I am one. I asked the other two to reflect on what writing the book meant to each of them. This month, on her return from holiday, Eileen writes about three important contradictions, conundrums and challenges about ageing. 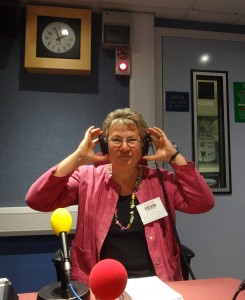 Eileen on air at the BBC

This is what Eileen Carnell wrote for Bookword blog:

It has been an absolute joy to work with Caroline and Marianne over the last two years writing our new book The New Age of Ageing: How society needs to change. We interviewed fascinating people and carried out numerous searches. The most stimulating part of the process was the dialogue we had together creating new ways of understanding the issues and then finally creating our vision to conclude the book. The whole process was extremely challenging, fun and inspiring.

Reflecting now, just over a month before publication date, has been useful in highlighting some contradictions, conundrums and challenges about ageing that I have found particularly striking.

I was excited when I came across the idea that we learn to ‘perform’ or act old. As a feminist researcher I was aware of the concept of performing gender. Relating the idea to ageing was incredibly useful. I was amused by what Ruth said: ‘I am aware of changes, hearing myself making sitting down and standing up noises like an old person’. There are clear rules in our society about what old people should and shouldn’t do and wear and behave, just as there are clear expectations for women in our society.

Jenny’s remarks nicely illustrate the idea that we learn to perform old:

Me and my partner are experimenting with being old for a few days … he’s had a hernia repair, I pulled a muscle in my hip. … S’interesting the sorts of things that one might need to get ‘a young person’ in for eventually … changing the bed linen for starters.

I like the ironic tone of this message. Jenny knows the situation is temporary – a rehearsal. But beneath the message speaks truth – an agreed cultural understanding of performing ‘old’ and how relationships with family, friends and younger people change as a result. Those who fail to conform are criticised or ridiculed. When Mike was preparing for a triathlon, aged 70, friends said ‘You must be mad at your age, you crazy man of excess. Why don’t you just put your feet up?’ The dominant image of older people is of decline – take that road sign of bent old people with sticks for example. 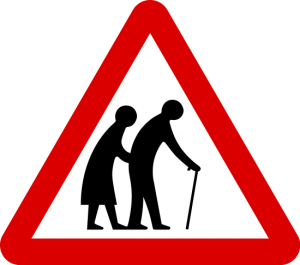 A contradiction emerges. There is a powerful message in our society that it is our duty to age well and healthily. That means being super fit and active for as long as possible, regardless of social background, economic status or level of physical ability. A blame issue develops: ‘they should have looked after themselves’.

Reading the work of Lorna Warren and Amanda Clarke helped me make sense of this conundrum. They draw attention to the idea that in attempting to counterbalance the ubiquitous images of decline it is important not to create new unachievable oppressions of physically fit, creative, active, adventurous ageing (see note 1). When writing I recognised the temptation to overdo the positive aspects which gives weight to this new tyranny.

Part of the tyranny is to hide signs of ageing – age denial. My sister Sheila, who was the prettiest of us three siblings, sent me a picture of her new face following Botox treatments. I was shocked and saddened, but in her 60s she was entitled to make this decision, although I felt it spoilt her looks, making her face looked ironed and her smile forced. But when I saw the headline: ‘Pageant Mom Gives Botox to 8-Year-Old’ that revealed the story of a mother administering Botox to hide her daughter’s wrinkles I was horrified (note 2). We three authors spent a long time considering our own attitudes towards the cover up. We agreed that this example of seeking perfection was an extreme form of cultural oppression. But where do you draw the line? Opinion is divided. Some see the use of cosmetics and treatments as empowering. It is clear that beauty ideals dominate many women’s lives and there is a growing belief that ageing is like a disease that can be cured. Subsequently the cosmetic business exploits women’s fears. I have come to the conclusion that if we persist as a society in hiding age then we will never re-educate ourselves to see beauty in the faces and spirits of older people.

Heading for the scrap heap?

Society does something strange to us as we age. We are no longer valued participants but seen as a burden, a problem or redundant. While many older people want to contribute they find it difficult to find ways to share their skills. Ray expressed his frustration after he retired from his role as a surgeon in a teaching hospital:

It’s such a waste. I could be a mentor or use my wisdom in other ways in an advisory capacity. I have so many transferable skills and it’s as if nothing I did in my professional life has any value any more. I feel I am on the scrap heap.

This is so sad. The challenge is to create structures and forums so that older people can share their wisdom and experience rather than leave it to chance.

I met an inspiring retiree, called Mo, who moved to a village in South Africa to set up a school. She said:

For me the way forward is clear – to tap into the global wisdom of so many who have reached retirement. There is immeasurable wisdom which could have a huge impact on so many in the world today.

I like the clear statement that old people need to be recognised as ‘assets rather than burdens … active contributors, not passive recipients’ (note 3).

Many older people, like Mo, do find ways to benefit society. We came across many who are still active in local, national or international politics and are vociferous in campaigning for a better world and in fighting ageism. The penultimate chapter of the book celebrates their contributions demonstrating there is no shortage of older radicals.

(3) Roberts, Y. (2012) One Hundred Not Out: resilience and active ageing. London: The Young Foundation.

5 Responses to Learning to be old