Harvey Weinstein and those books

On Friday 25th May the notorious Harvey Weinstein arrived at a New York police precinct to be arrested on charges of rape, a criminal sex act, sexual abuse and sexual misconduct.

What was the meaning of the books? The Guardian identified the meaning by identifying the individual books, one about Rogers and Hammerstein, and another a biography of Elia Kazan, the movie mogul who testified before the House Un-American Activities Committee and who was also accused of predatory sexual behaviour. They could not identify the third.

Later Harvey Weinstein emerged, looking less relaxed, flanked by one female and one male police officer. He no longer held the books.

Perhaps he planned to look cultured, inquisitive, a man who never looses the opportunity to add to his knowledge. I think this is unlikely as he has never appeared in public looking cultured, or without that stubble. And anyway, I do not think he has been arrested before, so there would be plenty to learn from his experiences inside the police station.

Perhaps he thought that the experience of being arrested would be so boring, like waiting for an outpatient’s appointment, that he would need distraction.

Perhaps his lawyer had advised him, at the front door, that the books would be a good prop, helping to create the image of a thoughtful man, because we all know that thoughtful men never commit rape. (For those who do not spot it, that’s irony.) I can imagine the lawyer’s assistant grabbing three books from a pile languishing by the door and passing them to Harvey Weinstein as he got out of the car. 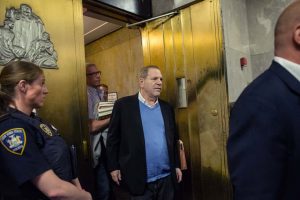 Although Harvey Weinstein did not carry them out of the building, the photographs show a clutch of books carried by someone just behind him as they emerge. Four books? More books than taken in? The same books?

Will we ever see them again? Will they be returned to Harvey Weinstein? What if he wants to read them them while he is jail?

I want to give Harvey Weinstein some advice, although it has been shown to be a bit pointless on previous occasions. But I will say it all the same. Do not touch, Harvey Weinstein. Books and people are not just for you to use.