For the second Readalong in the older-women-in-fiction Book Group I have been reading Greenbanks by Dorothy Whipple. Louisa Ashton’s life is more conventional than Claudia Hampton’s in Penelope Lively’s Moon Tiger and she is a quieter person than Hagar Shipley in The Stone Angel by Margaret Laurence. Her most attractive qualities are her steadfastness and generosity, and her love for her granddaughter, Rachel.

Louisa is first introduced to the reader through her portrait taken at the time of her marriage. Her youthful appearance is contrasted with the 56-year old Louisa at the Ashton clan’s Christmas table in 1909.

Louisa at the table was old, her hair was grey, she had no waist – not that she was fat, but her figure was gone past redemption – the trusting look had given way to a wise one, made wistful by a slight lift of the eyebrows. … She was a great housekeeper and derived great pleasure from looking after the bodily needs of other people. Their souls she dared not interfere with. (p2-3)

It can be quite a jolt to read that at 56 Louisa is already an old woman. 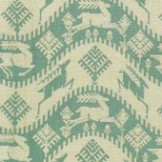 The novel follows the fortunes of her family for sixteen years from this event until 1925, when her granddaughter Rachel is 20. The main characters include her husband Robert (erring, suddenly and embarrassingly deceased), and her sons Jim (selfish, mean-spirited, full of his own worth) and Charles (her favourite, but regarded as useless and feckless by the males of the family and sent first to South Africa and then Malay before he joins up and is killed on the Western Front). Her daughters, Letty, Rose and Laura are all married, some more successfully than others.

The men do not emerge as good moral examples from this novel. Charles may be her favourite son, but he abuses Louisa’s goodwill and generosity, and in his casualness causes her pain. Her oldest son Jim is a very selfish creature, one of those sons who say things like ‘now I’m the head of the family’. He has no understanding of Louisa’s life or needs, has never considered her. In his own way he is as abusive as Charles, which Louisa mildly points out to him.

In a series of attacks by Ambrose and Jim, she placed herself firmly between them and Charles, and finally routed Jim by pointing out to him that he himself lived at Greenbanks at her expense.

‘You pay nothing here,’ she said, while he stared at her aghast. ‘If Charles pays nothing either, I see no difference between you.’ (p160)

Letty’s husband Ambrose is an entertaining character, but very destructive in his lack of imagination (all the men lack imagination except Charles who suffers from lack of realism). Ambrose’s behaviour is authoritarian towards his daughter, wife and mother-in-law, all in the name of appearance and convention. This is an interesting deviation from the assumption that older women are interested in keeping up appearances, minding what people think and say. Dorothy Whipple shows that in a conventional middle-class family of the time normality meant male selfishness, brutality, bullying, authoritarianism.

The women are flawed too but for the most part they are their own victims: Louisa is indulgent of Charles; Letty too keen to make a good marriage to notice that it would not make her happy; Laura follows her heart and causes scandal; Kate Barlow rejects Louisa’s kindness. 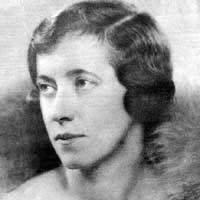 The scope of the novel – 16 years and 370 pages – allows Dorothy Whipple to follow the changes for women during this period. It was published in 1932. The rather unattractive Kate Barlow reveals some of these. She was a social outcast before the Great War but her transgression is less significant in the 1920s. And Rachel’s success in winning a State scholarship to study at Oxford indicates possibilities that a young Louisa could not have imagined. She is, however, opposed by her father who has a range of objections to the education of women, and to accepting ‘State aid’ for his daughter. He asserts his knowledge of what is best for her.

So what of the older woman in this novel? There are no counter-models in Greenbanks, and Dorothy Whipple is not endorsing early twentieth century conventional behaviour. Rather, she gives us a sympathetic portrait of an older woman, in whose life events are rarely dramatic. Her calm writing style depicts Louisa’s life as an accumulation of small events. She has been a witness to these events, rather than a player: her husband’s death; the emigration of her favourite son, his death in the Great War; her married daughter’s elopement; Kate Barlow’s infatuation with a celibate priest and her rejection of her own son. But when faced with difficult decisions and moral dilemmas Louisa consistently chooses the humane, the generous, the warm response over the mean-spirited and conventional stance recommended by the men.

The opening paragraph suggests that we should look beneath the surface and not accept things are as they are presented. Louisa appears conventional, but rejects conventional behaviour when it offends her more humane beliefs..

The house was called Greenbanks, but there was no green to be seen today; all the garden was deep in snow. Snow lay on the banks that sloped from the front of the house; snow lay on the lawn to the left, presided over by an old stone eagle who looked as if he had escaped from a church and ought to have a Bible on his back; snow lay on the lawn to the right, where a discoloured Flora bent gracefully but unaccountably over a piece of lead piping that had once been her arm. Snow muffled the old house, low and built of stone, and of no particular style or period, and made it look like a house on a Christmas card, which was appropriate, because it was Christmas Day. (p1)

And, like a silver thread, beginning with the opening scene at the Christmas table through to Rachel’s assertion of herself in the face of her father’s authority aged 20, Louisa stands by Rachel. A lovely model for grandmothers everywhere. Rachel is fully aware of everyone’s debt to Louisa, as the following exchange, near the end, shows. Rachel asks her grandmother to prepare Kate Barlow for a second visit from her son.

‘Eh, dear me,’ sighed Louisa. ‘You do give me some uncomfortable jobs …’

‘We do don’t we?’ said Rachel, laughter in her eyes. ‘We lead you an awful life. But what should we do without you I can’t think! Everybody depends on you, precious! Deserted husbands descend on you, defaulting wives apply to you for divorce, vicars, who go too far, place the onus of their celibacy on you, and now you have to prepare an unaccommodating mother to receive her son! And you’re such a little mild thing, darling! I could laugh at the sight of you, bless you!’ (p348)

This picture, called A June Interior, was suggested on The Persephone Post as a good representation of the relationship at the heart of Greenbanks. It’s by Louis Ginnet (at the Ditchling Museum/PCF). 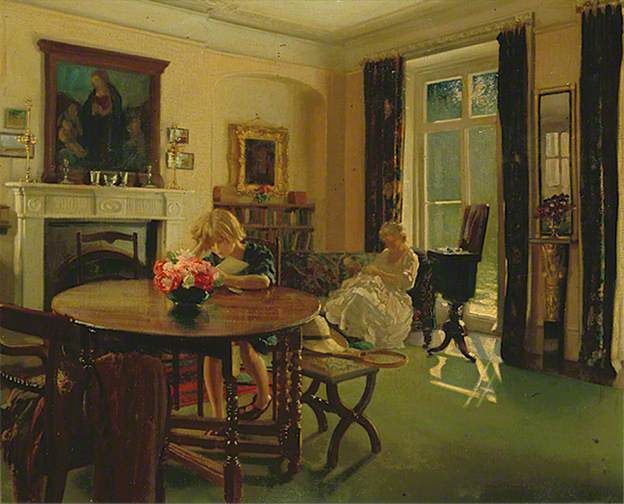 Dorothy Whipple deserves to be better known. Persephone has been republishing her novels and short stories are they are among their top sellers.

Three blogs reviews of Greenbanks by Dorothy Whipple that I enjoyed can be found here:

Fleur in her World

NOTE: The next older woman in fiction Readalong will be in December: A Reckoning by May Sarton, first published in 1978.

If you enjoyed this blogpost and want to be notified of further posts please subscribe by entering your email address in the box at the top of the column on the right.

4 Responses to Greenbanks by Dorothy Whipple