Do writers really need a routine?

Writers should write at the same time every day. It’s one of those pieces of advice that you read in creative writing books, are told on creative writing courses and is repeated on Twitter Tips for Writers. I read it again yesterday. Routines are good for writers, apparently. It puzzles me. What kind of life allows writers to have these routines?

I guess people with regular work commitments, people who have to get their kids off to school every day, people with compulsive behaviour patterns, these people might benefit from this advice. Or rather not benefit from this advice because they already are constrained by their schedules to write at the same time every day. It’s the only time they have.

For the people with irregular lives it’s no help at all. I prefer Dorothea Brande’s idea of making an appointment each day, a commitment to write*. You make it for the time that day that suits you, fits in with the other things you have to do – take the grandson to pre-school, lead a coaching meeting, catch the Mayflower Express from Paddington, attend a Pilates sessions, meet with co-writers and with the writing group – that kind of thing. You make the appointment and you turn up and write. Dorothea Brande calls it engaging to write. She also warns

Your agreement [to write] is a debt of honor, and must be scrupulously discharged; you have given yourself your word and there is no retracting it. (Becoming a Writer p77)

I don’t respond well to this kind of moral pressure myself, anymore than to prescriptions about routines. But sometimes writers need to treat themselves with more respect by keeping to the engagement, ensuring it takes precedence over sharpening pencils, emptying the dishwasher and checking emails.

She recommends a second exercise, which she calls early morning writing. If it weren’t a bit clunky I’d prefer to call it First Thing in the Morning Writing, because I see no intrinsic value in it being early. Becoming a Writer was published in 1934 and Julia Cameron credited it as ‘the best book on writing I have ever found’. She adapted the idea of early morning writing in The Artist’s Way in 1993, using the phrase Morning Pages.

I’m hooked, but it’s the closest to a routine I’ll get. Every morning – except Saturday – I get up at a good hour, make a pot of coffee and go to my writing room. I write two A4 pages by hand in a notebook. I’ve been doing it for nearly three years, and have filled 23 notebooks, about 2000 pages. I’ve recently been thinking that I should change and start my day by going for a walk instead. But I haven’t tried it. I think there is something too active about having to get up, dress and go outside. I shuffle upstairs in my dressing gown and hand-knitted socks with my coffee tray and that’s about enough effort for me.

I am a bit of a sucker for courses in books – six week diets, two months to get fit by walking, write a novel in a week … that kind of thing. I had some difficulty sticking with the 12 weeks of The Artist’s Way. Partly this is because I am not at ease with it being ‘a spiritual path to a higher creativity’ but I stuck with it because of the idea of the Artist’s Date. No this is not the renaming of the engagement, but a deliberate arrangement to indulge your artistic nature: a walk, a visit to an exhibition, an old movie, that kind of thing, by yourself – or as Julia Cameron puts it, in the company of your artist self.

Morning Pages loosen me up for the day’s writing, enables reflection and problem-solving. I explore my writing fears and problems, include liberal and useful comments from my Inner Critic (I wrote about him earlier). I rehearse ideas, images, sequences. I record my Artist’s Treats. I comment on books as I read them, ideas for the blog … 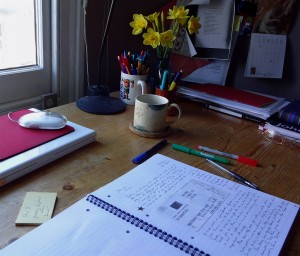 Writing about her own diaries (which she might have called After Tea Pages) Virginia Woolf recorded this:

‘… the habit of writing thus for my own eye only is good practice. It loosens the ligaments. Never mind the misses and stumbles … I believe that during the past year I can trace some increase of ease in my professional writing which I attribute to my causal half hours after tea.’ (A Writer’s Diary, April 20th 1919)

‘For my eye only’, except that her diaries were edited and published, but the point was that these were for her own purposes, to loosen the ligaments. I’ve no idea which ligaments, perhaps just metaphorical ones, but I’ll not argue with the good practice, even if I can’t write at the same time every day.

Do you need routine in your writing? Which do you find helpful?

*Thank you Lynda from the King’s Place Writing Group for first pointing out the idea of the writing appointment to us.

5 Responses to Do writers really need a routine?