Being told you are clever when you are young is not necessarily a compliment. There is the problem of being too clever by half. And if you are a girl it can be a disadvantage in the eyes of those who believe it is your mission to get a man. Tongue-in-cheek it may be, but the words of the song The Dumber they come the Better I like ‘em (by Stephen Derosa) is a warning that all clever girls of the ‘60s will recognise. Clever girls, educated babies, wisenheimers, smart girls, they don’t know how to make love and men don’t want them.

There are plenty of clever girls in fiction, and on the whole they do get their man, but after a struggle. Clever girls write fiction after all. Jane Eyre, poor but clever, marries her employer. Dorothea (Middlemarch), first marries the dry, arid Casubon before giving up her inheritance to marry Ladislaw, who better appreciates her. Elizabeth Bennett’s fine eyes and wit are sneered at by the Miss Hurts, but capture the proud and brooding Darcy and his huge fortune and beautiful house. Sydney Warren (The Hotel, Elizabeth Bowen) is awkward in relationships, but at the end of the novel is off to make something of herself. Maggie Tulliver, Lucy Snowe, I’m sure you can name many more.

In the sixties girls were divided into those who were clever and those who weren’t. Cleverness and prettiness did not coincide, we assumed. And clever girls, we were told, would find it harder to get a man and were advised to hide or deny their smartness and limit their education. What use is cleverness when your destiny is to marry and have babies? In a twenty-first century twist Boris Johnson, Mayor of London, believes that women go to university today in order to find a husband. 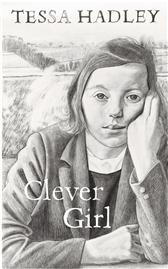 Clever Girl by Tessa Hadley (2013) has another take on the clever girl. Stella grows up in Bristol in the ‘60s and excels at school. But being clever does not save her from falling into a series of unfortunate relationships and non decisions. In the first place she finds secondary school unbearable.

By the end of the first week I knew I had found my way, through some terrible error, into enemy territory where I must as a matter of life or death keep my true self concealed. The school was a mill whose purpose was to grind you into its product. Every subject shrank to fit inside its exam questions; even – especially – the books we read in English lessons. (67-8)

Stella becomes pregnant and leaves school before taking A levels and acquiring the passport to the clever girl’s life at university. She runs away from home and lives with a number of people who take pity on her: an aunt, a housemother at the local public school, a teacher who had loved her soul mate, a commune and then with a friend. The impetus to change her life comes when she reads some lines of poetry by Whitman.

It wasn’t their meaning that affected me, it was the words themselves – the solidity of them, their being assembled together in that particular order and rhythm – which stopped my breath. They seemed a signal from another, bigger life than the one I was in, as if a smothering blanket had been torn through. (142)

Having seen the other, bigger life, Stella once again engages with the words of others. She acquires a degree in English literature as a mature student and could have continued into postgraduate education, but decides that this kind of formal education is not for her. Stella appears to survive a series of episodes in her life, more or less passively. Indeed the only thing she is good at is escaping. She runs away frequently: from home when pregnant, from Mrs Tapper (who saved her by providing home and work and Walt Whitman), from Fred who also gave her a home, and from time to time from her much older husband. But gradually and despite some uncertainty Stella changes so that she helps others, providing in her turn a home for the daughter of a friend and raising the child as her own.

The story is told in the first person, in rather a flat tone, which reinforces her experience of life as a series of episodes that happen to her. Tessa Hadley’s skill is in the language she uses, which pinpoints details making the narrative compelling, as these two extracts illustrate. Stella’s cleverness, we come to see, is not a worldly awareness. We find out on the first page that she has never questioned what happened to her father, having been told he died, but she doesn’t notice the absence of grief, mementos, what ifs or anniversaries that would confirm his death.

The episodic style fits the passive aspects of the story, and one can see how two chapters were published separately as short stories in The New Yorker. I’ve read Tessa Hadley’s earlier short stories and admired her ability to confront human failings, and the rather grim aspects of being alive. The collection was called Sunstroke, which illustrates my point. In Clever Girl Stella acquires enough wisdom to steer herself adequately through life after about 50 years of experience of it. That’s one form of cleverness. Some reviewers have been unconvinced by aspects of the novel – (Stella’s choice of career Elaine Showalter in the Guardian, for example). But I think Tessa Hadley has an eye for the unlikely details in life, such as clothes, novels, décor, career choice.

I’ve been to college, I’m full of knowledge, go the lyrics from The Dumber they come. That’s one form of cleverness. In Clever Girl Tessa Hadley has offered us a more uncomfortable version of cleverness.

What clever girls have you met in fiction? What did you think of this novel?