A literary Salon with Peirene Press

I was a literary salon virgin until Saturday night when I attended a Peirene Press salon. I’m not sure from where my ideas of a salon derived. Possibly from eighteenth century French history and literature when the salon is remarkable for being the domain of a woman, but populated by men. It’s an island sanctuary to support the artist in a cruel world – cruel to women as well as to the inevitably impoverished artist. In the salon the writer’s true worth is appreciated, applauded, celebrated and even paraded. At times fierce battles play out between the authors – harsh criticisms, rivalries, denunciations. The membership changes. Madame la Salonniere continues to preside, ensuring the right degree of frisson, admiration, support and critique. 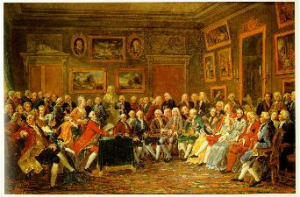 Twenty-first century reality is every bit as crowded (see the picture) but utterly unlike other aspects of the Eighteenth century French salons. On Saturday the central event was much like any present day literary event: a reading by the author, an interview followed by Q&A with the audience. But the occasion was wrapped in a party.

We were welcomed at the door by young people with charm, enthusiasm and wine. I really enjoyed my choice of the sparkling Portuguese. (Wine I mean; I don’t think the other kind of sparkling Portuguese was available.) It was crowded with 50 guests, but the people there were very friendly and interesting. It was busy. It was fun.

The Salon was to celebrate Peirene’s publication of Birgit Vanderbeke’s The Mussel Feast (reviewed on this blog in January). Birgit Vanderbeke was amusing at times, but with serious intent. Meeting with your translator, she told us, is a bit like meeting your doctor. He knows so much more about you than is comfortable. Later she described the novella as a cupcake, claiming it as her form.

Translation was a theme of the evening, and she and Jamie Bullock talked about those hidden aspects of translation. The grammatical issues (such as the use of full-stops), culturally specific items referred to in the original text, stylistic issues (such as repetition which is a feature of The Mussel Feast) and how the author must let go in order for the translation to work in its new language. Translation is necessarily an act of violence, of violation.

The author also told us about the writing, the process of creating the text, done in three weeks. She knew that it was her moment to write. This was during the specific and uncertain time just before the Iron Curtain collapsed. Readers bought it and borrowed it from libraries. But reviewers hated it and attacked her rather than the text, something we have heard a great deal about recently: women personally attacked as a response to publicly speaking the truth.

An addition and appreciated feature of the Salon was the explicit respect shown to the reader: in the publisher’s welcome and provision of excellent wine, cheese and company. Meike’s pride in publishing this book, her commitment to publishing European literature in beautifully designed books, and the graciousness of her staff, all this indicated respect for the reader.

I felt a little like Le Grand Meaulnes when he stumbled on a magical party. Like the party Meaulnes came across, this literary world was one I had happily entered. But let’s not take this French connection much further. I am not on the edge of adulthood and this salon will not change my life. But I will happily discuss books, drink sparkling wine and meet people interested in European literature again.

7 Responses to A literary Salon with Peirene Press